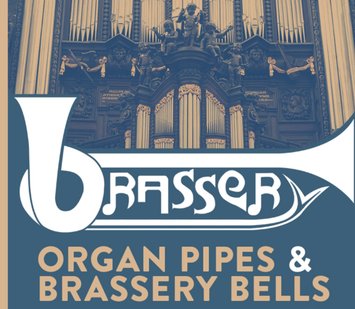 In this project the brass quintet joins forces with an organ.

I.   I Pini di Villa Borghes

For the first edition of 'Organ Pipes and Brassery Bells', Marc Goris arranged 'Pini di Roma' by Ottorino Respighi for brass quintet and organ. This symphonic poem evokes ancient Roman scenes and explores the countless possibilities of sounds and colors resulting from this festive combination of 'brassery' bells and organ pipes.

I.   I Pini di Villa Borghese

Nicolas De Troyer (° 1984) studied piano and organ as from an early age. Since he preferred the organ, Nicolas decided to start higher music studies at the Lemmens Institute in Leuven with Reitze Smits and Luc Ponet. In 2007 he obtained the degree of "Master in Music" with highest distinction for his main instrument,  the organ. In addition, Nicolas obtained in 2010 a master's degree in harpsichord (with distinction), and finished in the same year his postgraduate advanced organ studies with a recital concert in the Brussels cathedral; the theme of the concert centered upon light and resurrection in contemporary organ music. He obtained this degree with the greatest distinction and congratulations from the jury.

After his studies at the Lemmens Institute, Nicolas pursued studies in musicology at the Katholieke Universiteit Leuven, and obtained in June 2012 the degree of "Master of Arts in musicology" with distinction.

As a soloist, Nicolas has already given several concerts at home and abroad. He regularly cooperates as a continuo player with various ensembles and has already played with, among others, Il Fondamento, BachPlus and La Petite Bande. He assisted in a number of CD recordings, including the publication by Orgelkunst of the complete works for organ of Gabriel Verschraegen. In 2014 he produced his first solo CD "Across Borders" on the historic Le Royer organ of the St. Peter's Church in Turnhout.

As a musicologist Nicolas regularly gives lectures, e.g. for the Davidsfonds. Nicolas teaches organ and music history at the academy of music, word and dance in Hamme. Since 2008 he is lecturer-organist of the historic organ of the St. Paul's church in Antwerp.